This is a fun family cycle trail that we created for York Cycle Campaign in May 2020. 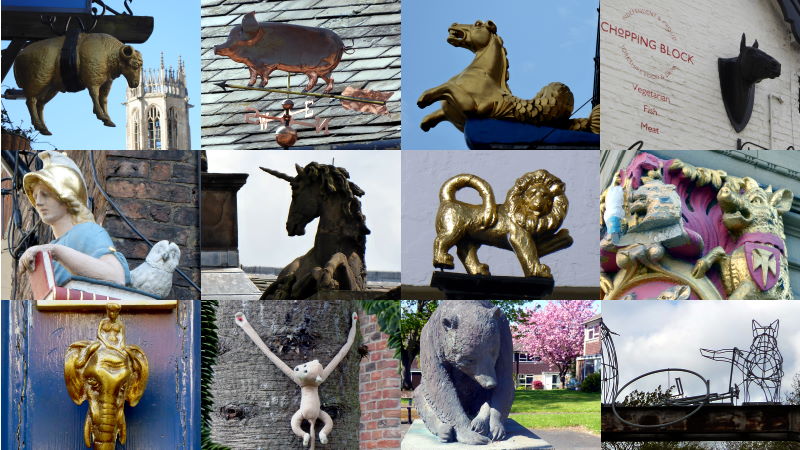 It takes you round a menagerie of animal statues, most in the centre, a few on the outskirts. You can see an overview map at Google Maps: York Animal Trail. (There are some bonus animals on this map that we didn't fit into the trails below.)

There are three versions of the cycle trail. The long route and medium route require a bit of on-road riding and aren't suitable for younger children. The short route sticks to the city centre and can be done on foot.

All routes start and finish at the Minster. Detailed instructions and photos are on the links below.


METHODOLOGY
• We've only included three-dimensional figures in the trail, so no mention of murals such as the Tansy Beetle in Queen St near the station flyover, or any number of pub signs.
• We've restricted our coats-of-arms count to the two 'interesting animals' (boar and squirrel). We ignore a whole pride of heraldic lions, such as on Jigsaw on Stonegate, or decorating the almshouses on Skeldergate, because, well, they're common as muck.
• Also, animals must be permanently viewable, so we haven't listed the life-size plastic cow that can sometimes be glimpsed in the alleyway of the Whippet Inn on North St, magnificent though it is.
• Exoplanetary life-forms, such as the Cyberman and Daleks on the petrol station on Hull Rd, have been excluded.
• Note that this paper has not yet been peer-reviewed.

MORE STUFF LIKE THIS
If you enjoy finding quirky things like this, you'll be interested in local author Catherine Sotheran's book York in Close Up, which has lots more.