This is a fun family cycle trail, devised for York Cycle Campaign in May 2020.

It is 15 miles long and takes you round 13 animal statues in the city centre and outskirts, including a bear, owl, squirrel and naughty dog. You can see a map with the position of the animals (and a few bonus ones not on this trail) all marked on our special Google map.

This is the long version of the route. It includes a fair bit of cycling on roads, and isn't suitable for younger children. There is an alternative short route of 2 miles covering seven animals in the centre, which can be easily ridden or walked. There is also an alternative medium route of 6 miles which includes ten animals.

All routes start and finish at the Minster.

Remember that you're only allowed to cycle in the 'footstreets' – the city centre, in other words – before 10.30am or after 5pm. Inside that period you're better off walking the trail rather than pushing your bike.

From the Minster, head past the Dean Court Hotel and turn right at the lights up St Leonard's Place. At the next lights, turn left onto Bootham, and then second left down St Mary's. 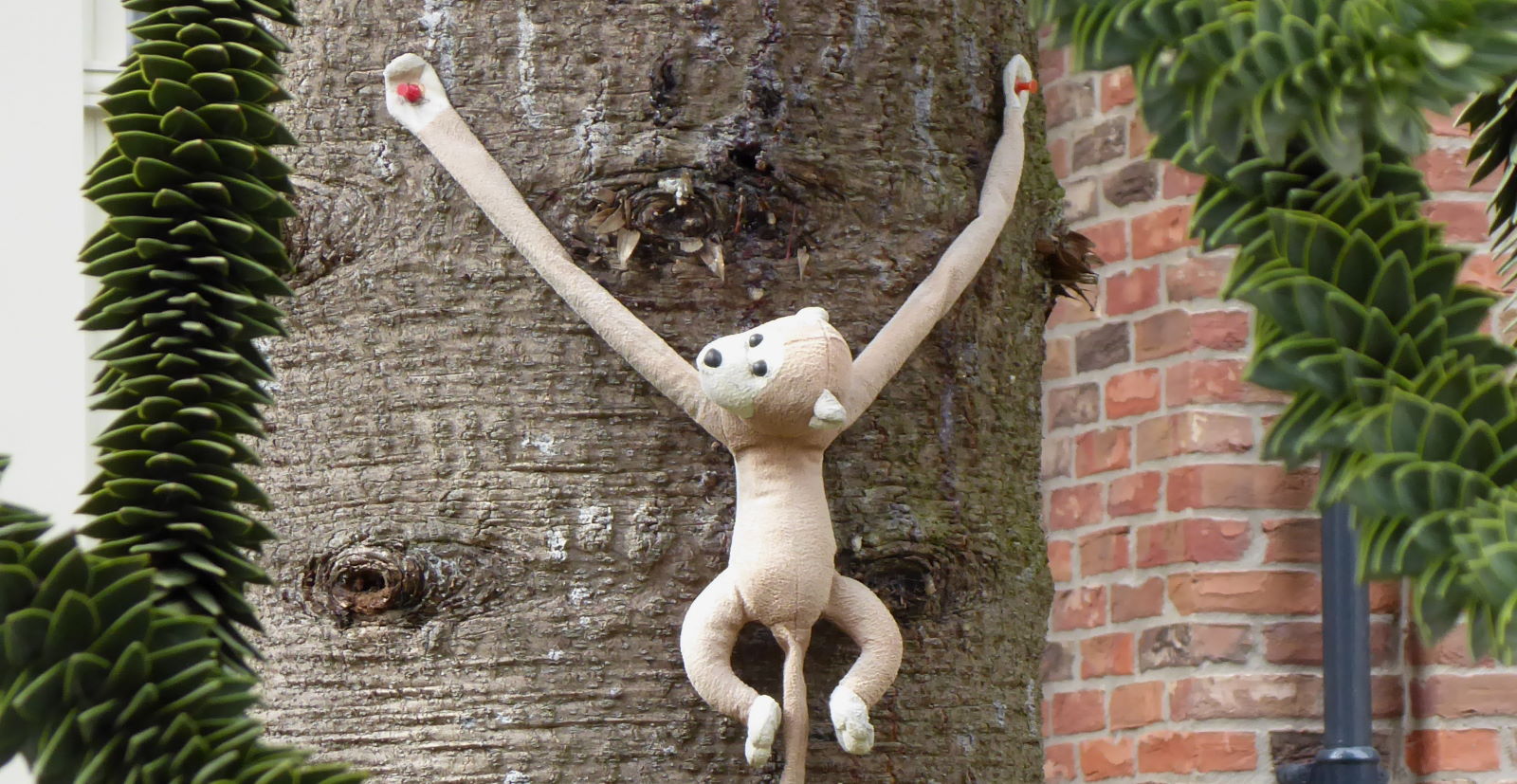 Halfway down, on your right, is a large monkey puzzle tree. Trying to solve it is a little monkey, climbing up the trunk (pic).

Carry on down the street and down the steps (with bike chute) at the end. Keep on in that direction along the path and over Scarborough Bridge.

On the other side, turn left to follow the riverside, on paths and on quiet roads, south. After the third bridge, take the second right up Clementhorpe, and then left on to Bishopthorpe 'Bishy' Rd. 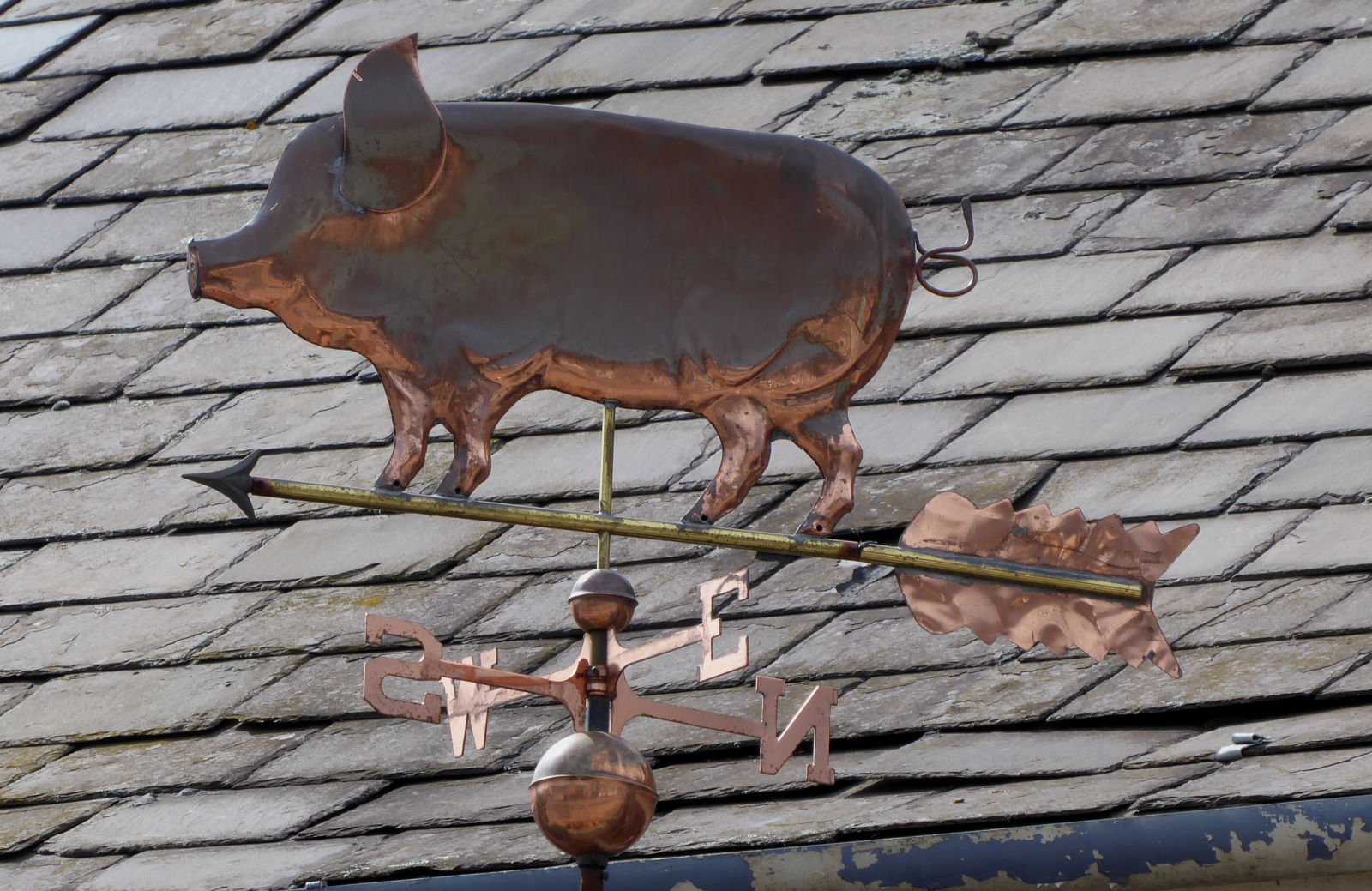 A short way up on your right, on the roof of the Pig & Pastry cafe, is a pig-shaped weathervane (pic).

At the lights, turn right, and then branch right on to Nunthorpe Rd. Just after the give way lines, turn left down the cycle path opposite Scarcroft Lane. Cross the road and continue straight on up Scarcroft Hill. At the end, turn left on to Albemarle Road and then immediately right, following the blue cycle route sign down on to the playing field. Keep following the 'Orbital' route signs for about five minutes until you get on to Hob Moor. When you see the small stone monument on your right, branch left, then bear left into Hob Moor Terrace. Carry on until you see a little path on your left and a sign saying '10-21 Chalfonts'. Go up this path, following the left and right turn. You are now in the square of Chalfonts. 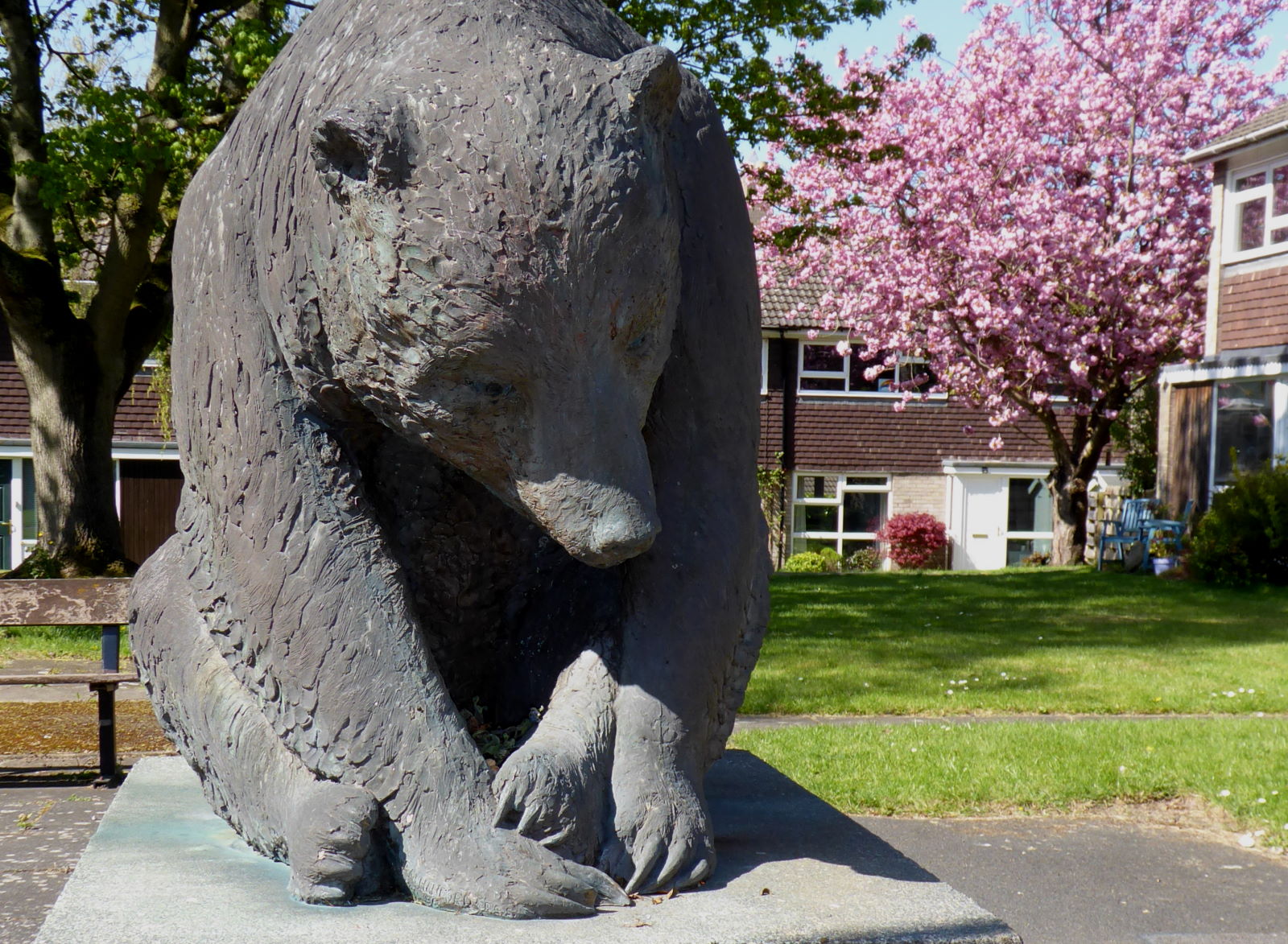 In the middle of the square is a large bear statue (pic).

Carry on past the bear, jinking left then right, and continue down Chalfonts to the main road. Turn left and soon retrace your steps along the Orbital back across the playing field to Albemarle Road. Turn right and follow the road to the end. Turn right along Campleshon Road and then left into Racecourse Road. After passing the grandstand, after the road swings left, turn right to join the cycle path that crosses. Now follow the blue cycle route signs for NCN65, turning left at the Sun and past models of the planets until you arrive at the magnificent bridge over the River Ouse. 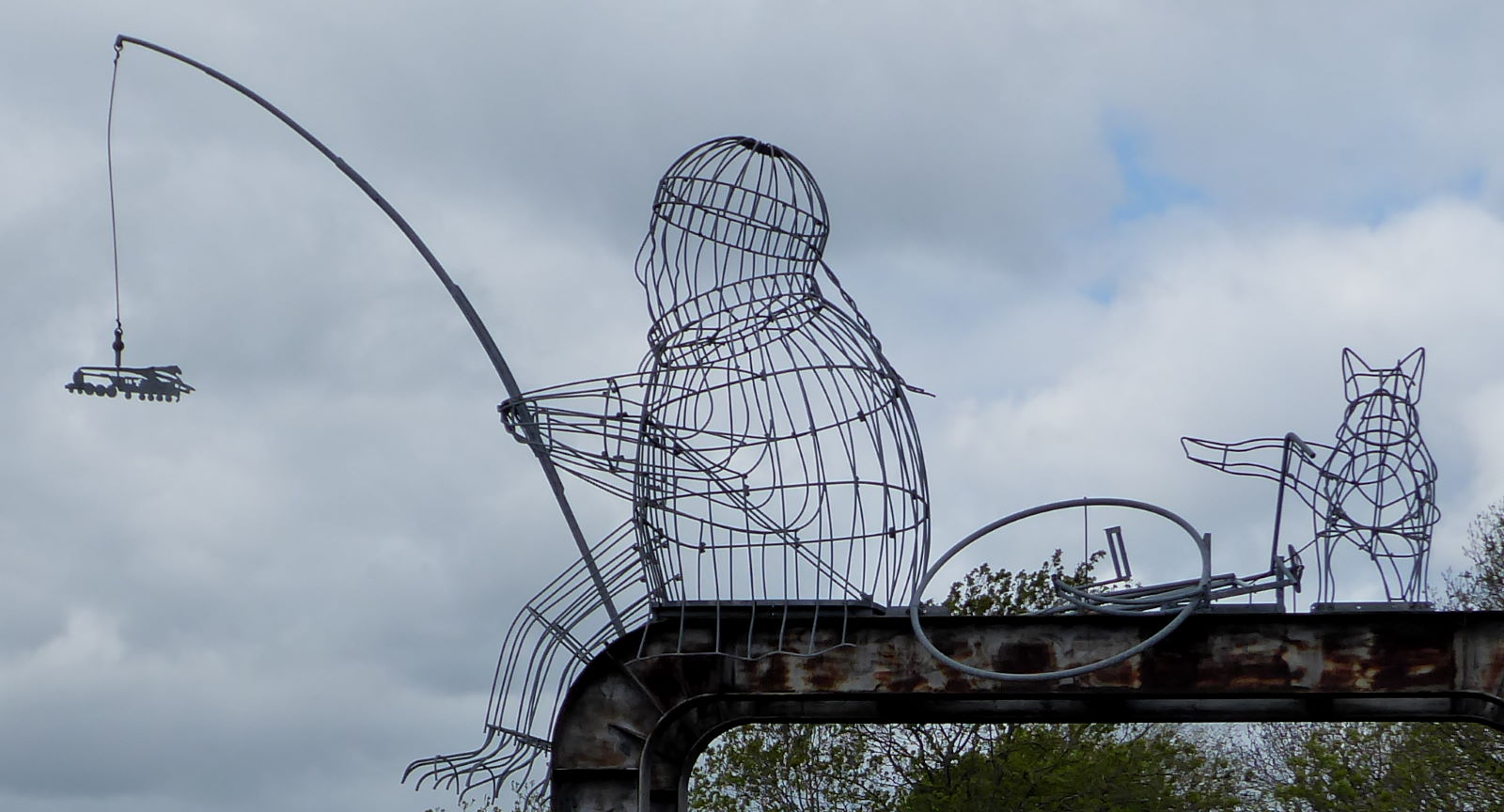 On the bridge is a wire sculpture, the 'Fisher of Dreams'. The angler has caught a train (the Flying Scotsman, which used to ply this bridge when it was the East Coast Main Line). His bike is on the ground behind him, but a naughty dog has decided to territorially mark it (pic).

Shortly after the bridge, come off left and follow the bike path alongside the road past York Outlet retail park. Keep following the road to the end, and turn left on to Selby Road. Carry on through Fulford. Just after the alms houses on your left, turn left down St Oswalds Road following the blue bike route signs. These take you right at the bottom and lead to you to the riverside path, passing the Millennium Bridge on your left. Carry on until you see the Blue Bridge ahead to the left, and turn right to follow the York Orbital for a very short distance. At the main road at the top, turn left down Fishergate. After the Edinburgh Arms on your right, at the lights, now loop right and right, up Fawcett St. 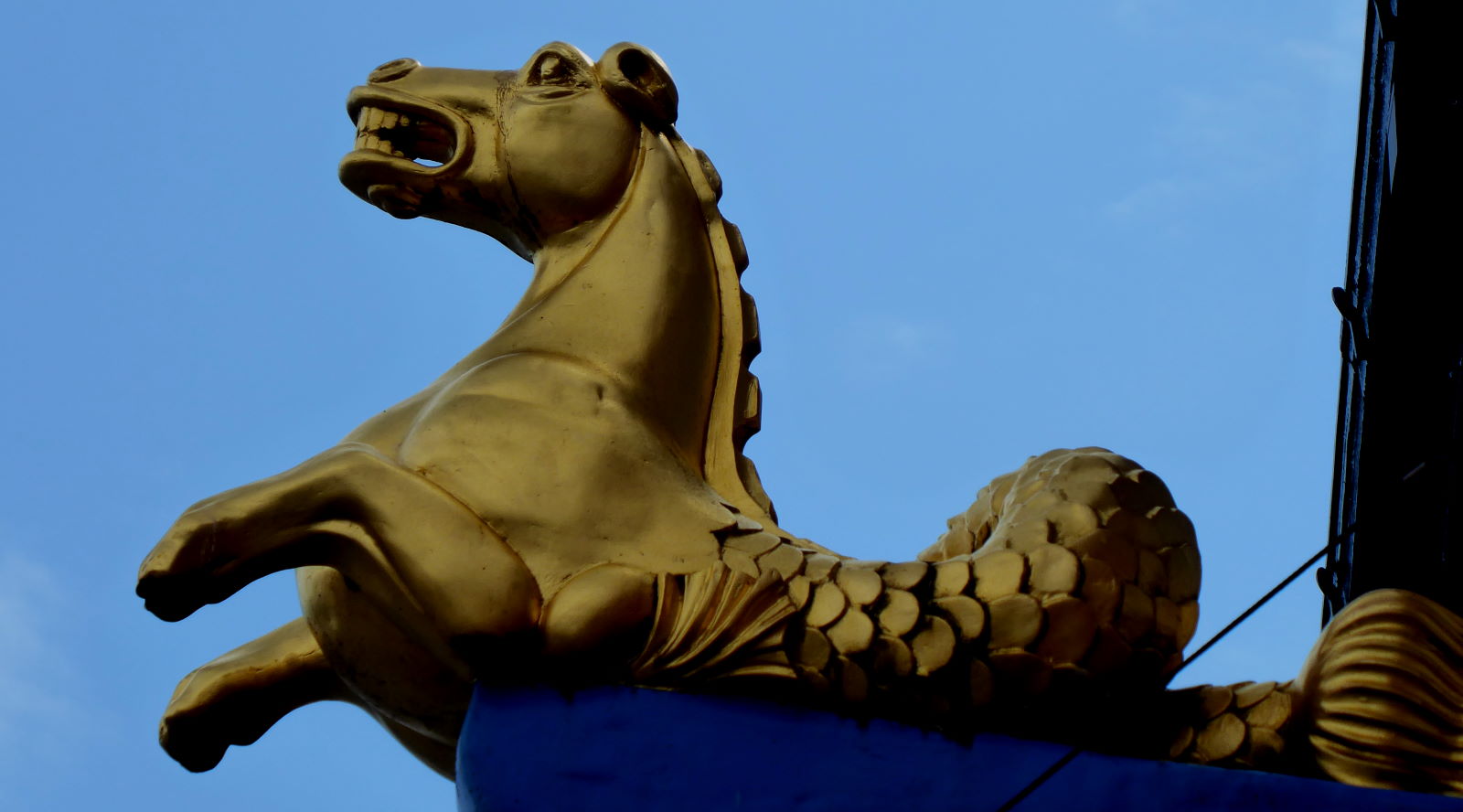 The gold figure of a sea-horse (not a 'seahorse') adorns the front of the Sea Horse Inn (pic). It's a rather scary looking beast, and has funny legs.

Immediately before the Edinburgh Arms, turn right up the snicket and then right again where you were a minute or two ago. Carry on straight down Fishergate, crossing the River Foss. At the roundabout-like junction (before the next bridge) turn right up Tower St and turn first right, before Clifford's Tower, into the 'Eye of York', with the Castle Museum and York County Court. 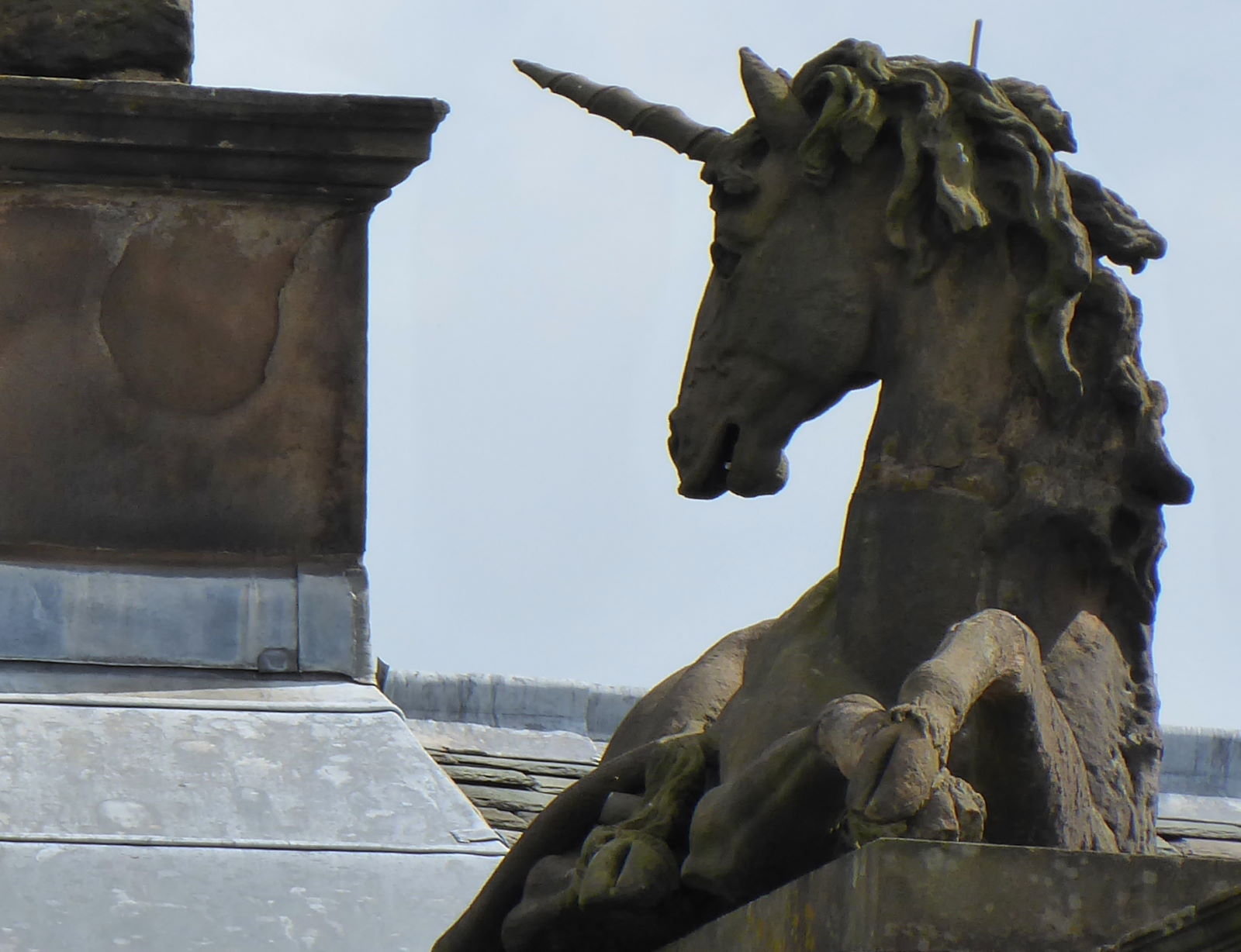 A large carved statue of a unicorn decorates the roof of the County Court building. The best view is from up the steps to the top of Clifford's Tower.

Make your way across the car park on the right of Clifford's Tower and go up Castlegate. At the end turn right on to Coppergate, and at the lights turn right down Piccadilly. At the mini roundabout, turn left, then right down Walmgate. After a few yards you see the Walmgate Ale House bar on your right, which has the Chopping Block above it. 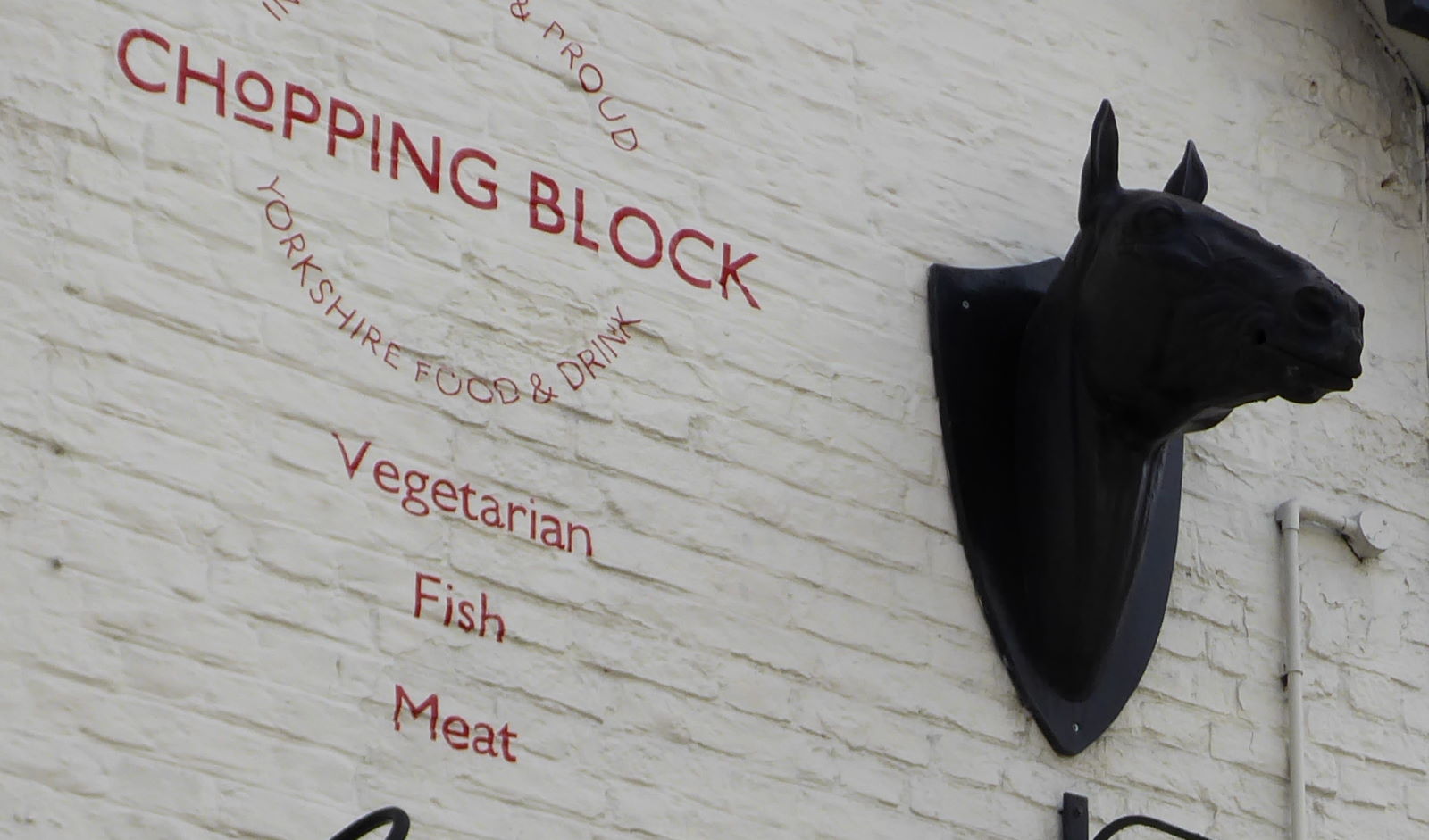 There's only the head of the horse here, along with a lot of other strange things sticking out of the pub front (pic), including a chopping block.

There's a not very scary ghost as well. There's also a cat, one of two dozen cat figures adorning buildings round the city centre. They are described separately elsewhere on the internet, for example at York Cat Trail.

Turn round and head back up Walmgate the way you came in. You'll have to walk the short distance to the FR STUBBS IRONMONGER old sign; you can now cycle up Fossgate, to the right of that sign. At the end of Fossgate, turn left and go past Greggs. 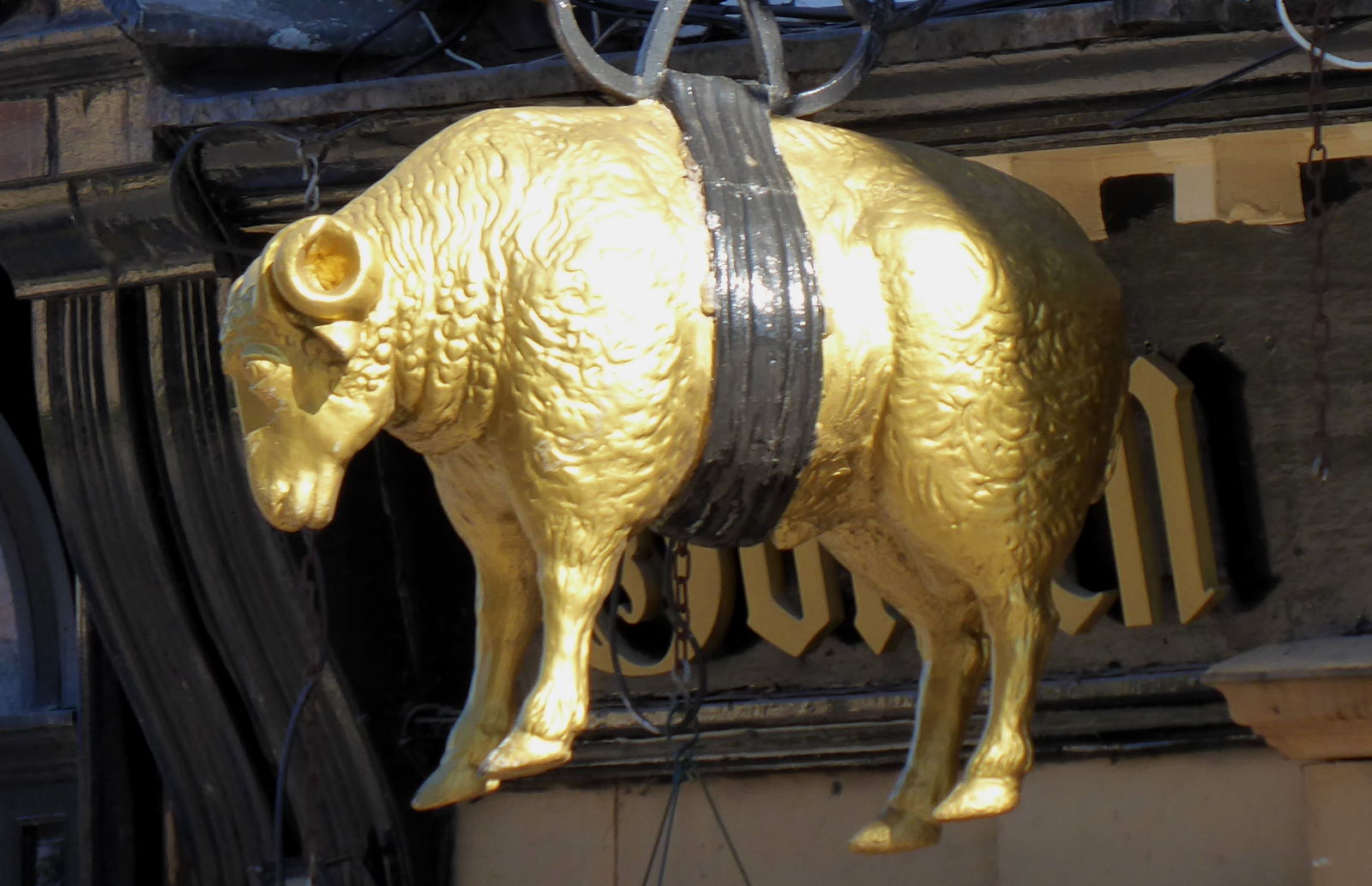 A large golden sheep statue hangs off the sign for the Golden Fleece pub (pic) on your left.

Slightly above it is another of the cat figures. Or rather, half of one. It's white, and is a ghost cat, because the pub is haunted. .

Carry on through the light, branching right up Ousegate, on the right hand side of the church. Turn right up Spurriergate – don't carry on to join the road at the complicated pedestrian crossing and lights in front of you. Carry on to the corner with Market St on your right. 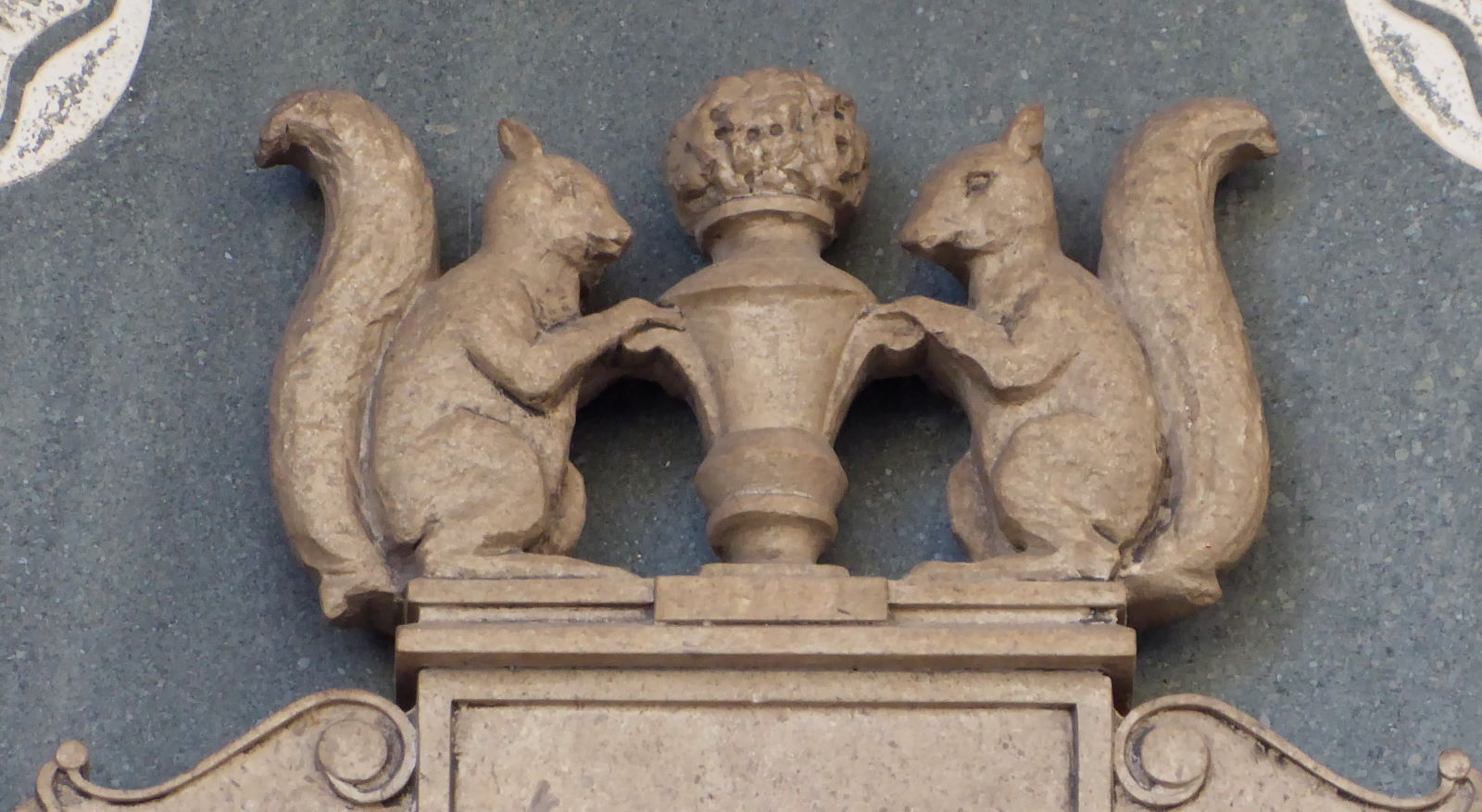 The coat of arms above the entrance to Nat West Bank on your right, at the corner with Market St, has two squirrels. We think they're probably red squirrels. The roses are white, though.

Carry on up Spurriergate, which becomes Coney St, until the corner with New St on your right. 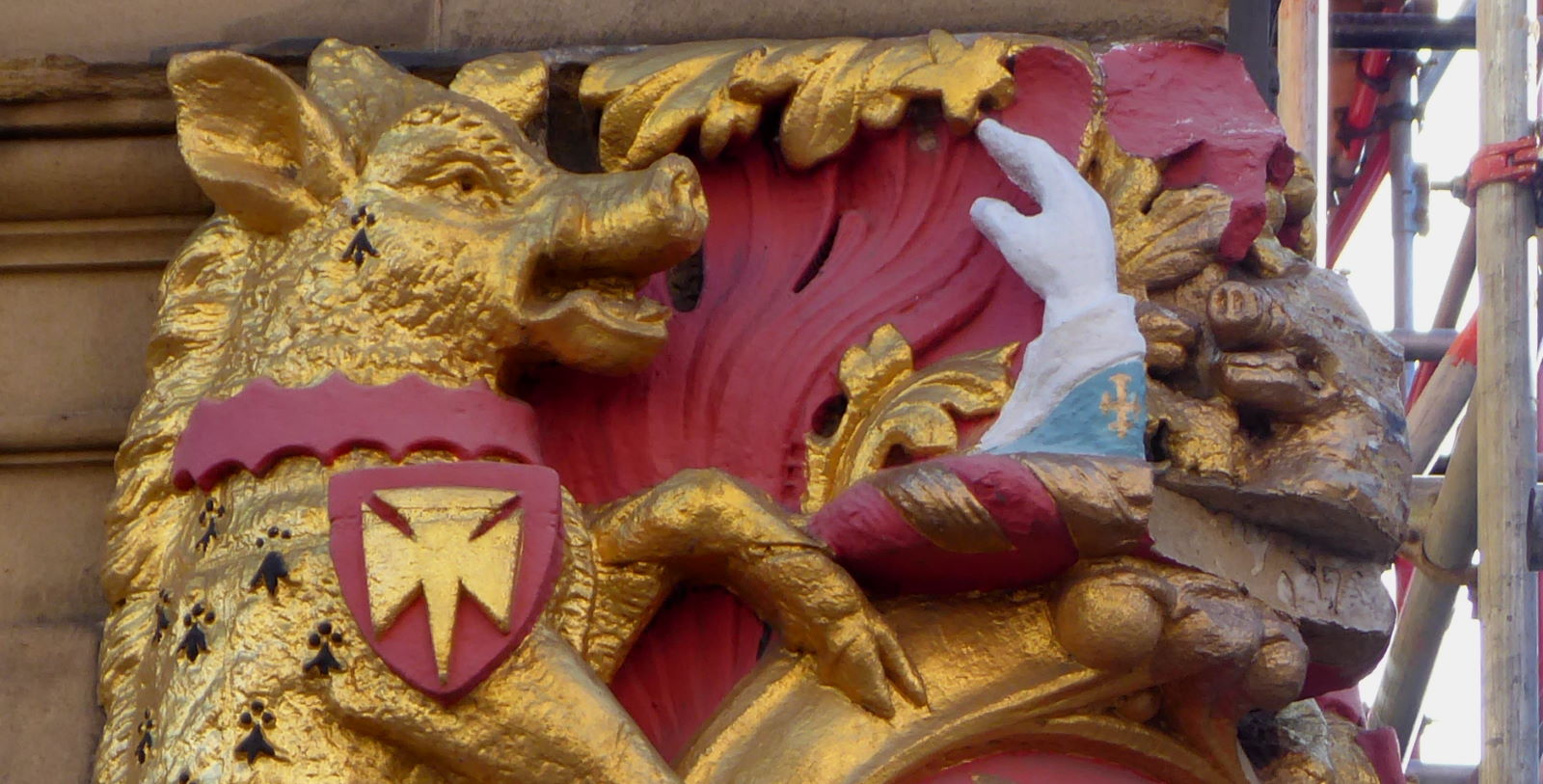 The coat of arms above the Starbucks on the corner of New St has two complete boars, and the head of another one (pic).

Carry on down Coney St to the corner of St Helen's Square to you right. On your left is Mansion House. 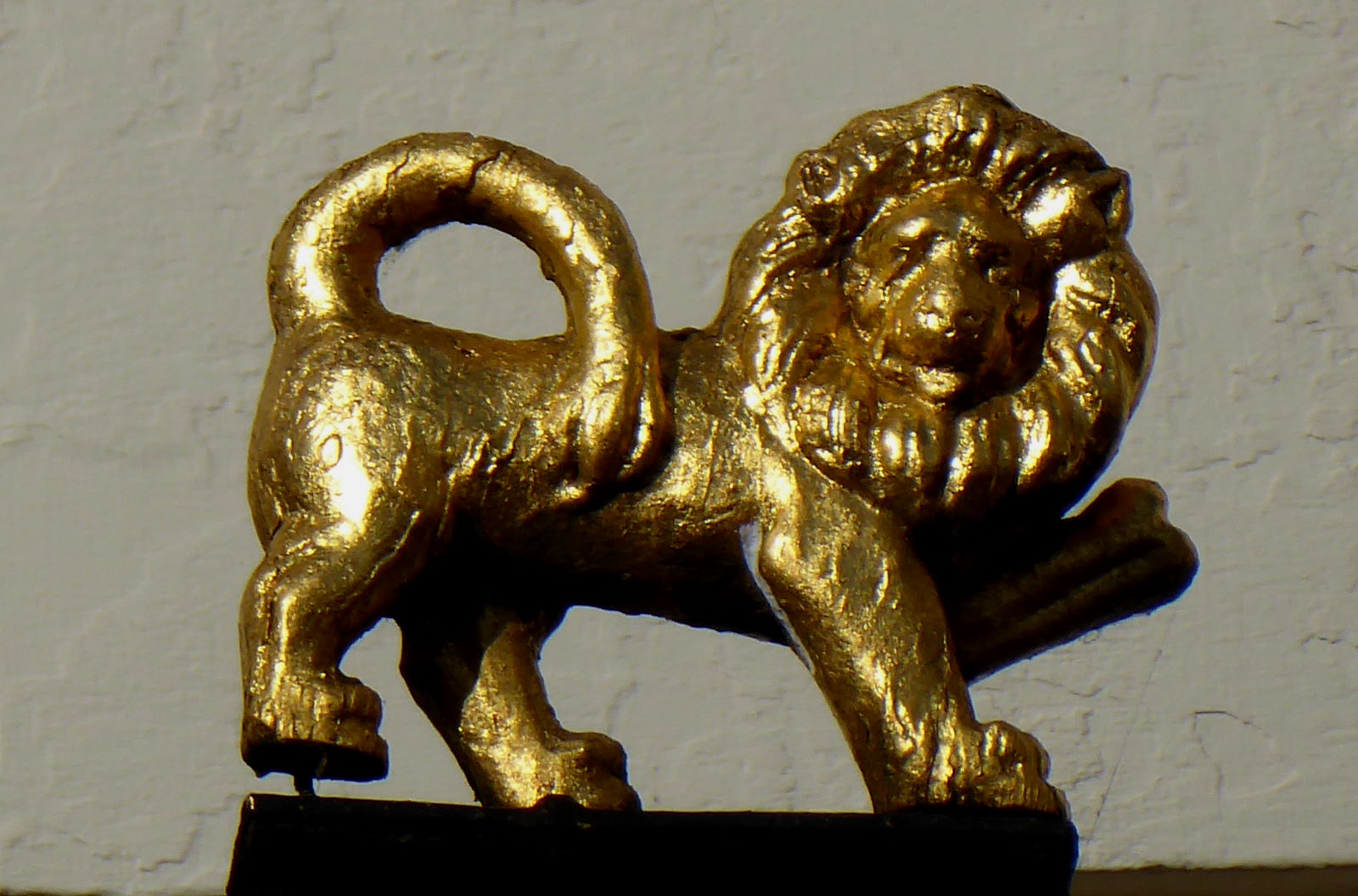 The decoration of the splendid facade at first-floor level has two small lion figures (pic).

Turn right across St Helen's Square, and continue down Stonegate to the junction with Petergate. Just to your right is a blue door, belonging to No 40. 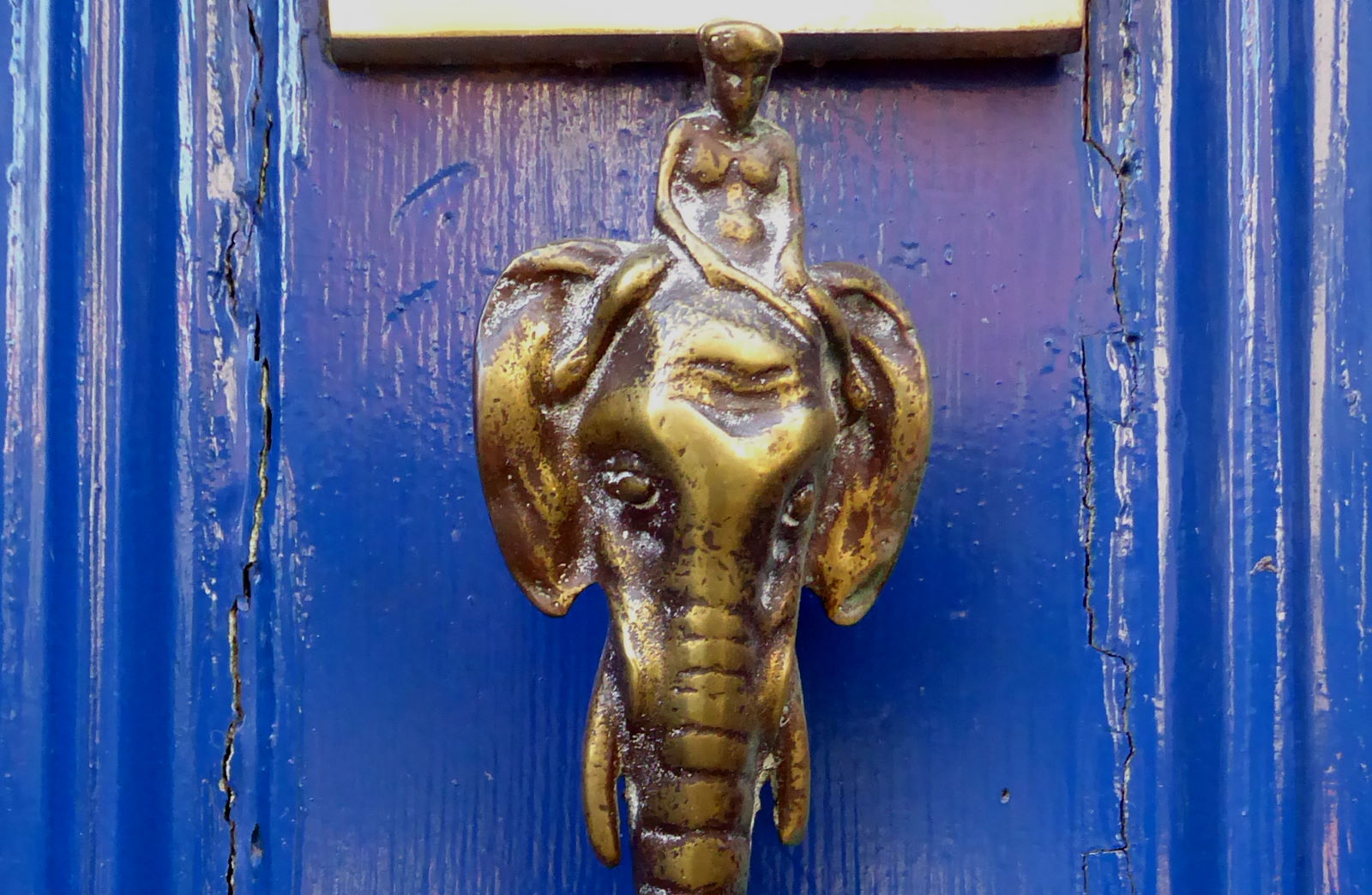 The knocker is in the shape of an elephant's head, complete with mahout riding it. 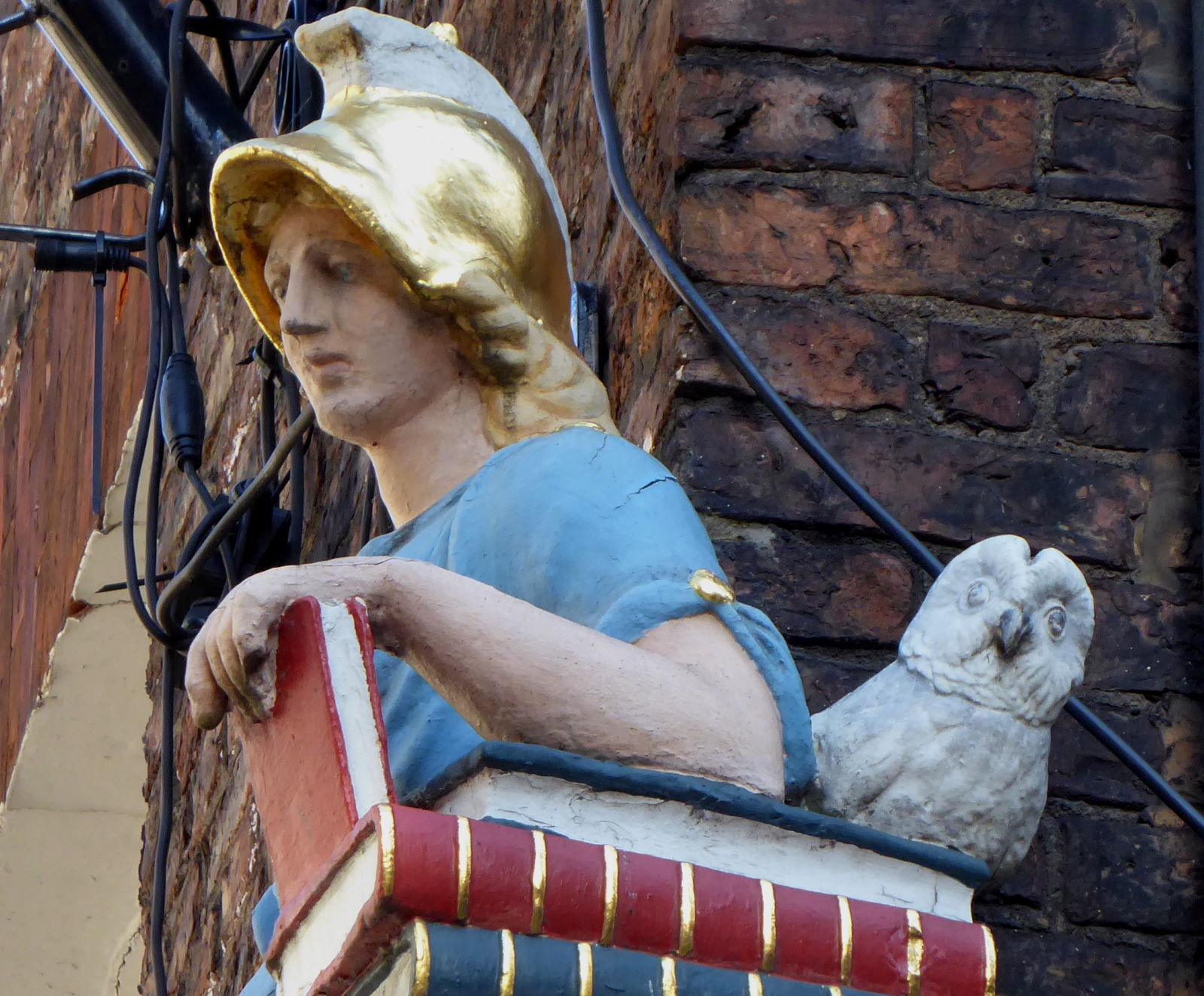 To your left, on the corner of Minster Gates and Petergate, is the owl (pic). It's sitting behind Minerva, which seems very wise.

Carry on up Minster Gates and turn left in front of the Minster to get back to where you started.

Congratulations! You have collected all 13 animals.