The first of my Rivers Rides was a two-day, 70-mile scoot from the Pennines to the Ouse along the River Don. Day 1 featured reservoirs and railtrails, an island brewery, and a comical cycle installation. At least I think it was meant to be comic. (On to Day 2 →) 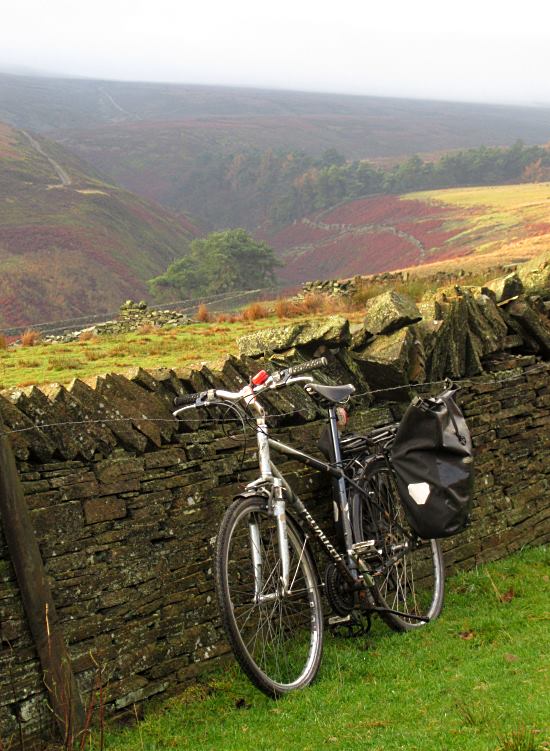 The Don starts here (pic), where Great Grains Clough dribbles off the Pennines into Winscar Reservoir, a few miles west of Penistone. Those hills up there are the historic border of Yorkshire, and this is as close as you can get with a bike to the river's source, on a track above the north side of the reservoir.

I'd decided to do this trip on my town bike, as the Don mostly makes its way through industrial towns. And, like the Don, my bike is grey-brown, unspectacular, functional, and covered in mud. 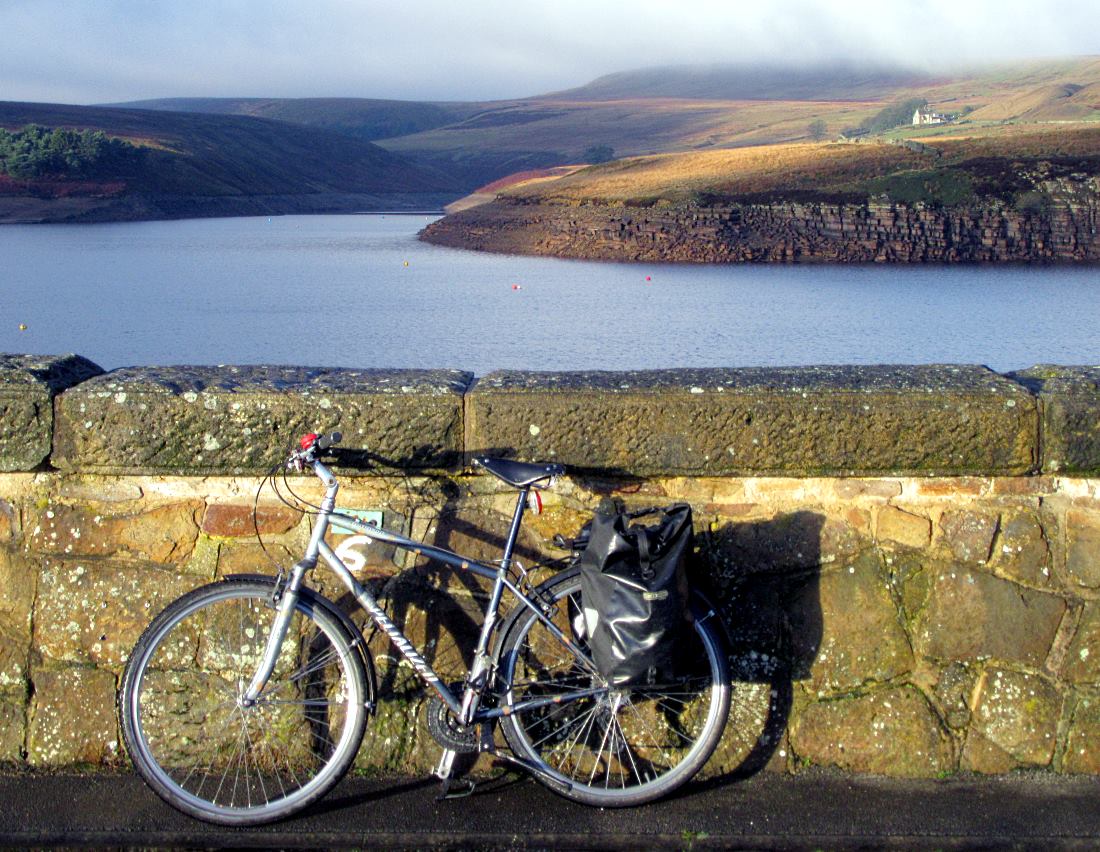 Buttery sun tried to sneak through the cold, damp November morning (pic). The infant Don, only a few hundred yards old, starts spectacularly here as Winscar Reservoir, but this is as wide and impressive as it ever gets in its 70-mile life.

I enjoy the geographical wonder of how a river knows a way through the surrounding hills to the sea, going downhill all the way. My river rides are all, in theory, a freewheel from source to mouth. Just like Windows 10 updates download imperceptibly in the background and install with no problems, in theory. 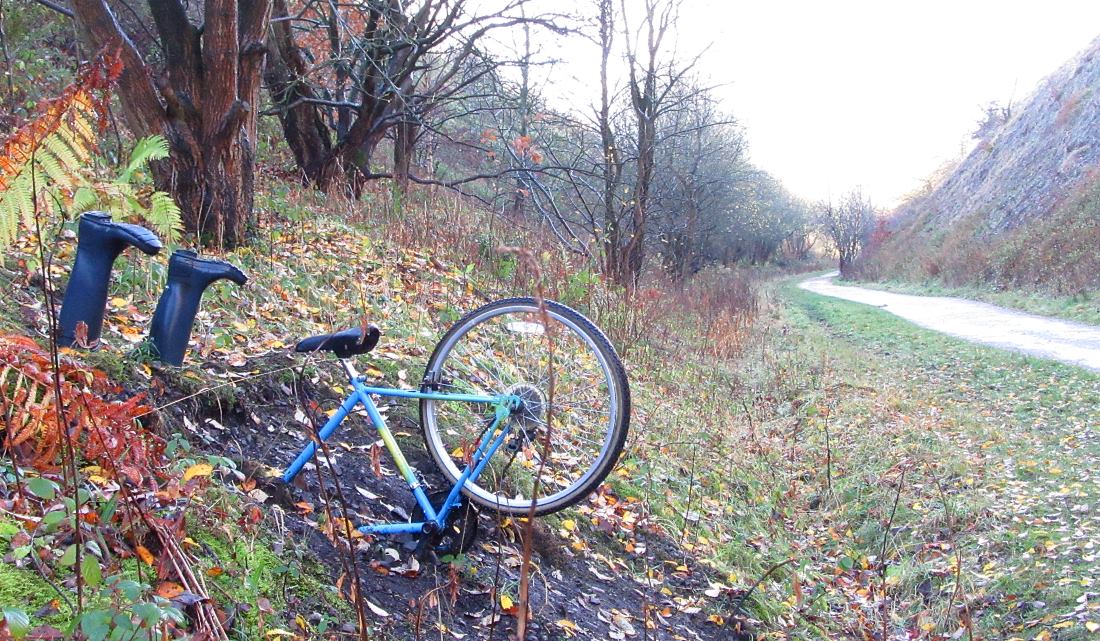 From the reservoir, several miles of good surface railtrail track the Don. It's part of the Trans Pennine Trail, which I cycled in 2011, but which like my CV is rather less than the sum of its parts. This sculpture (pic) decorates the trail just west of Penistone, but has no explanatory plaque. I suggest: See? Helmets do not protect against all types of accident. 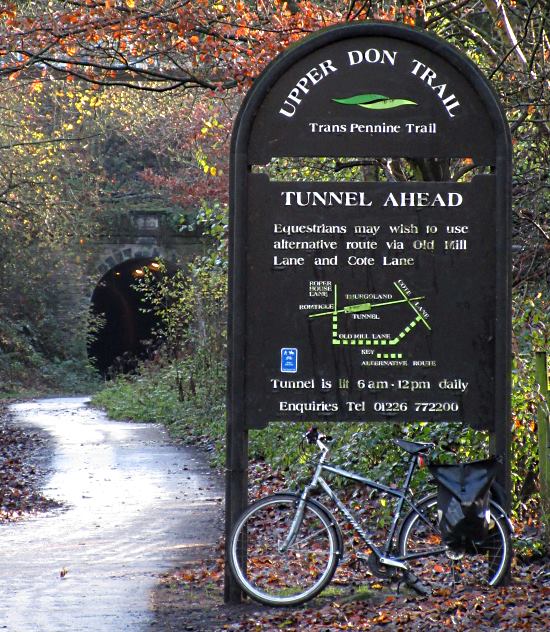 I spent nearly an hour in Penistone – not because there's much to see, but because the queue in Greggs was so long.

The railtrail continued beyond, and featured this exciting tunnel (pic) at Thurgoland, a curving concrete-walled job with a spookily echoing acoustic.
Up to Thurgoland tunnel, the cycle route was great – good smooth tarmac – though you only get glimpses of the Don itself, down scenically below. After the tunnel it's unsealed, and today it was all rather muddy. So I came off that and took the A6102 that runs alongside the Don, and I could enjoy this stretch of the river in its full scenic majesty: factories being demolished, sewage plants being constructed, and lots of lavishly-puddled waste ground with JCBs, cement mixers, lorries, and blokes in hard hats holding plans and pointing at things, like politicians on a photo-opp. 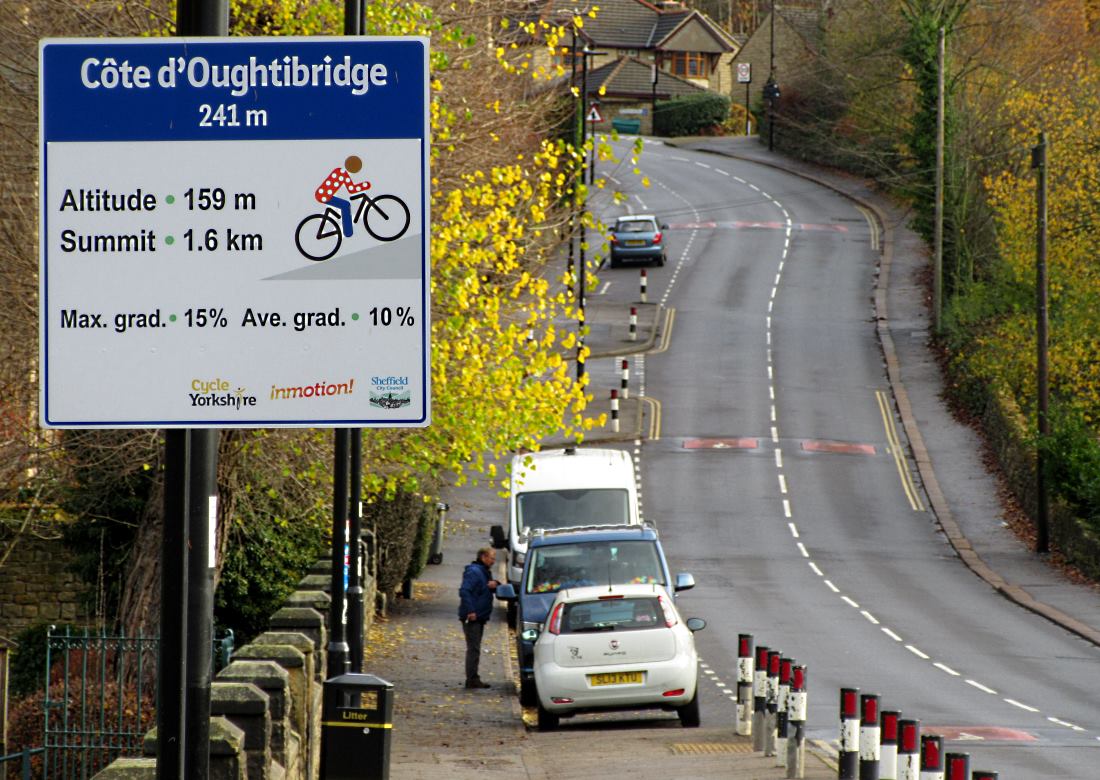 Rising up from the Don at Oughtibridge is 'the Jawbone' (pic), one of the major climbs from the Tour de France's visit to Yorkshire in 2014, commemorated in this sign. No, of course I didn't ride up it. I had a two-ton town bike with full panniers. The TdF guys had 7kg carbon-frame bikes. My lunch alone weighed more than that. 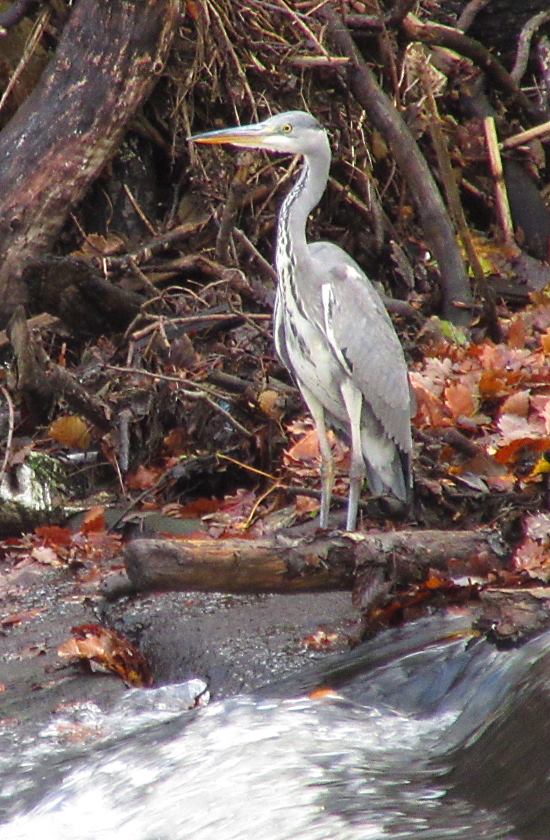 The Don's tumbling waters provided power for mills and factories for hundreds of years pre-electricity. Unfortunately it also provided a handy waste pipe for them too, and it was little more than an open sewer.

In the last few decades though regulation has cleaned the river up remarkably, especially above Sheffield, and now it provides good fishing (pic). 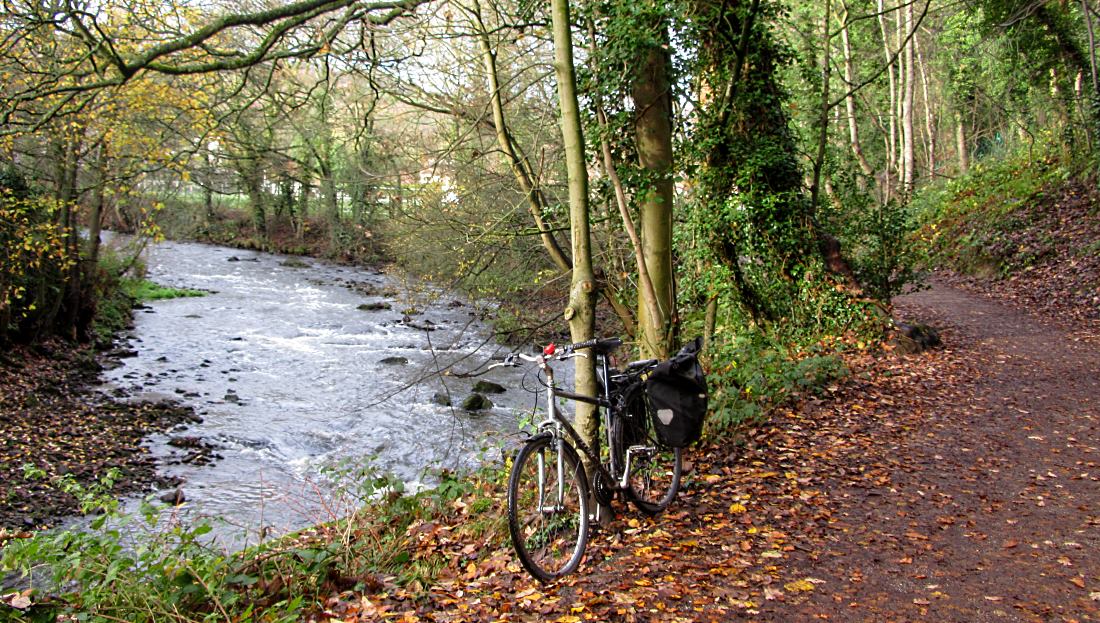 South of Oughtibridge, at last, was a riverside cycle path with pleasant scenery (pic). That eventually turned into the A6, which wasn't quite as pleasant or scenic, though it did take me grandly past Hillsborough footy ground... 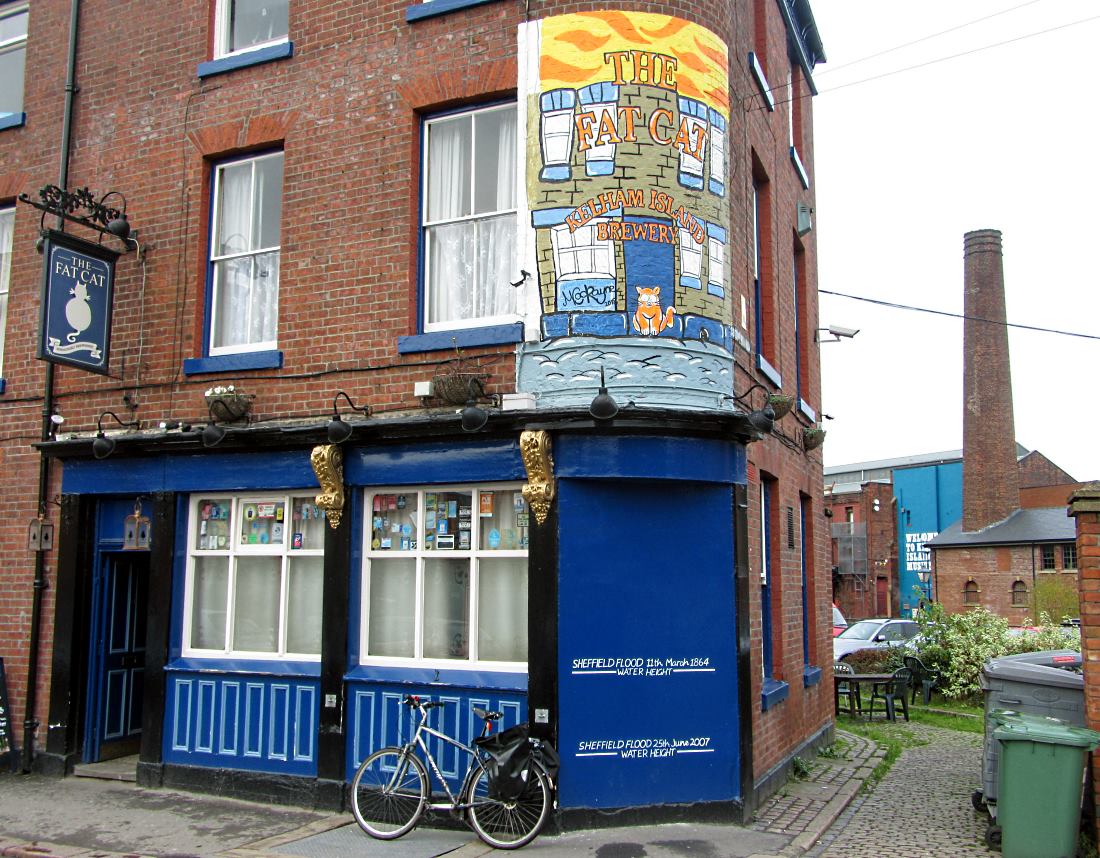 It's a cracking little place, Victorian and unspoilt, with a friendly local atmosphere and excellent beer: yes, from next door, so it has very few food miles, or beer yards, or whatever. I had a splendid pint of Pale Rider (5.2%, hoppy and tangy without being abrasive, well-balanced and characterful, £3).

Which, after a chilly day cycling, brought some colour to this pale rider's cheeks.