Day 2 of the River Calder ride featured three aspects of Yorkshire: world-renowned sculpture, a traditional Leeds welcome, and riverside rubbish. (Back to ← Day 1) 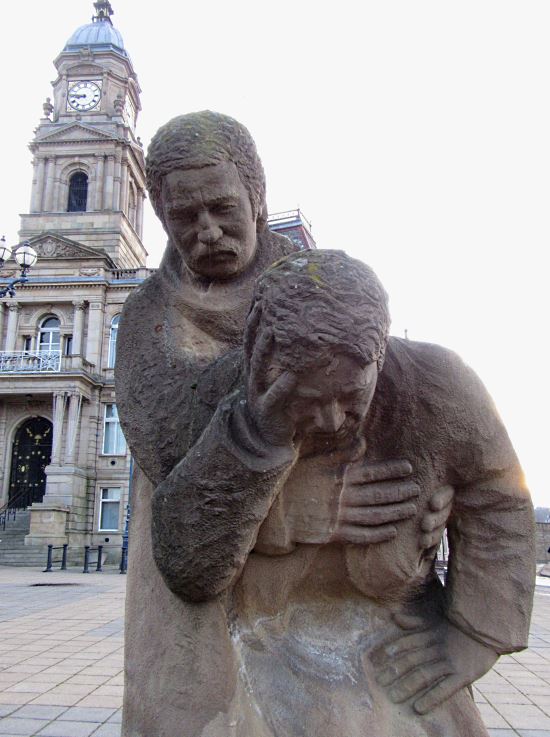 I stayed in a cheap and cheerful pub room in Dewsbury. It’s said to be one of England's most divided communities, and not only by Brexit: just over the river in an area called Savile Town, 95% are Muslims of Indian or Pakistani background. There were only white faces in the town centre last night though, skulking outside the takeaways or trying fruitlessly to get me to play them at pool.

The beer was £1.90 a pint, but accordingly mediocre: you’d be more likely to find an imam in there than a CAMRA member. The statue in front of the town hall (pic) seems an appropriately despairing comment on things. Perhaps the sculptor had drunk there too. Or was a Remainer. 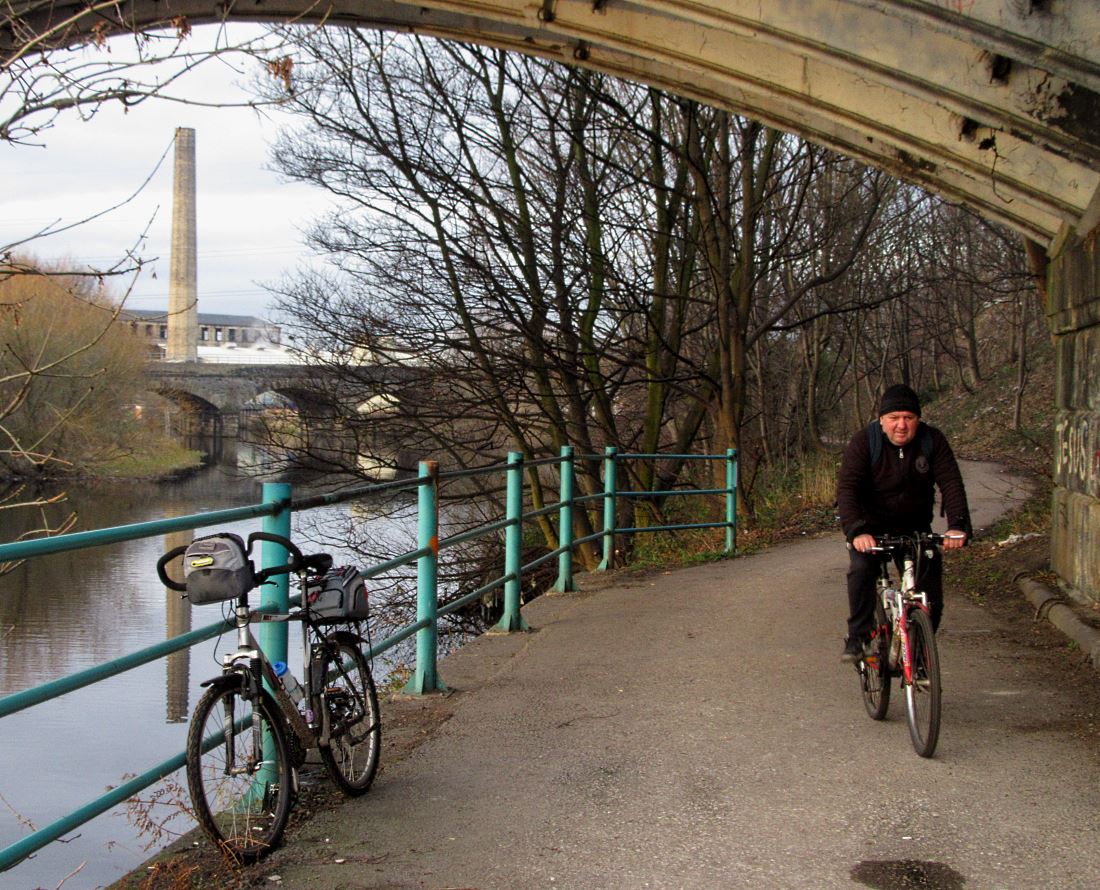 Anyway, fortified by the pub’s very hearty Full English breakfast, I set off, pleased that my immune system, fortified by regular cycling, would be able to fight off any mild infections cultivated in the kitchen. The Calder Valley Cycleway runs right alongside the river (pic). It’s a gritty sort of landscape: derelict industry, piles of rubbish, and pale, defeated-looking middle-aged white men in beanie hats, such as cycle bloggers whose bacon was underdone and overeaten. 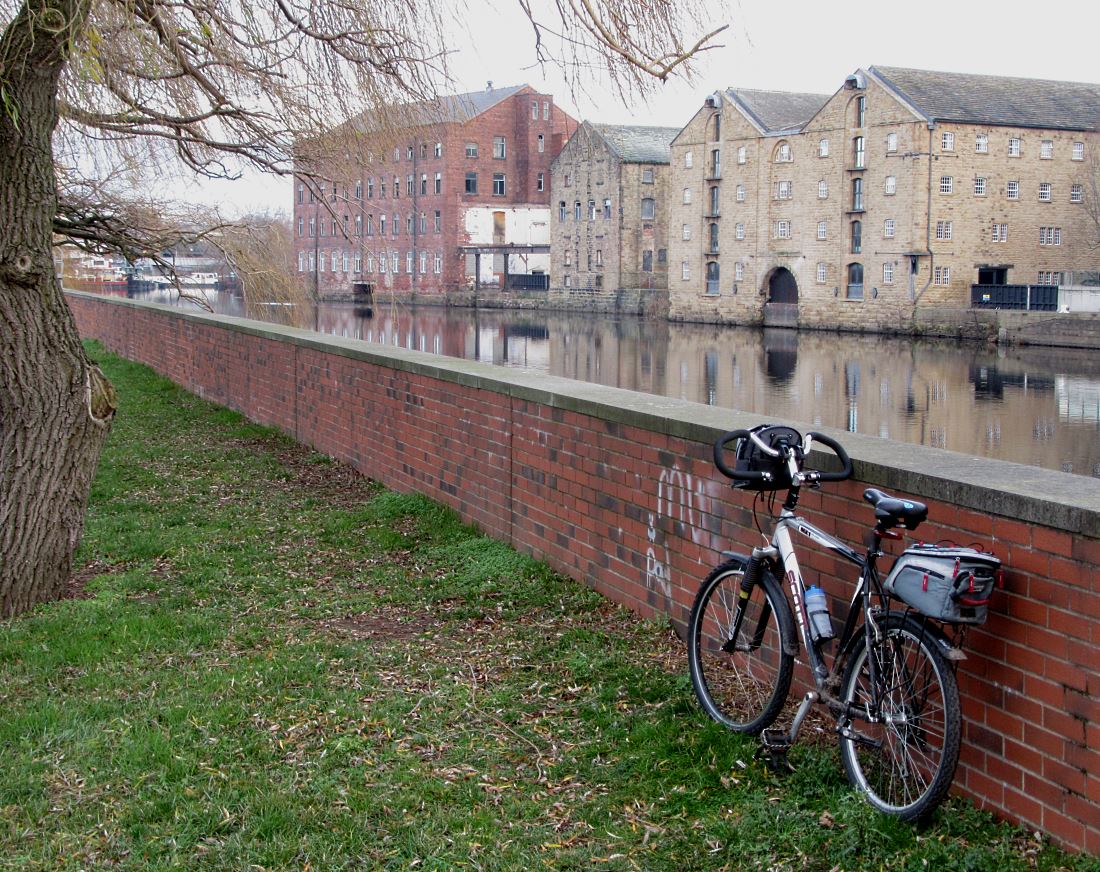 The cycleway continues with quite a climb out of Dewsbury on a newly refurbed path, looking down on the Calder Valley, and took me through the pleasantly pedestrianised market square of Ossett before tracking a railway line and rejoining the riverside just before Wakefield (pic), one of Yorkshire’s seven cities. (The others are Leeds, Bradford, York, Sheffield, Hull, and the one everyone forgets, Ripon.) 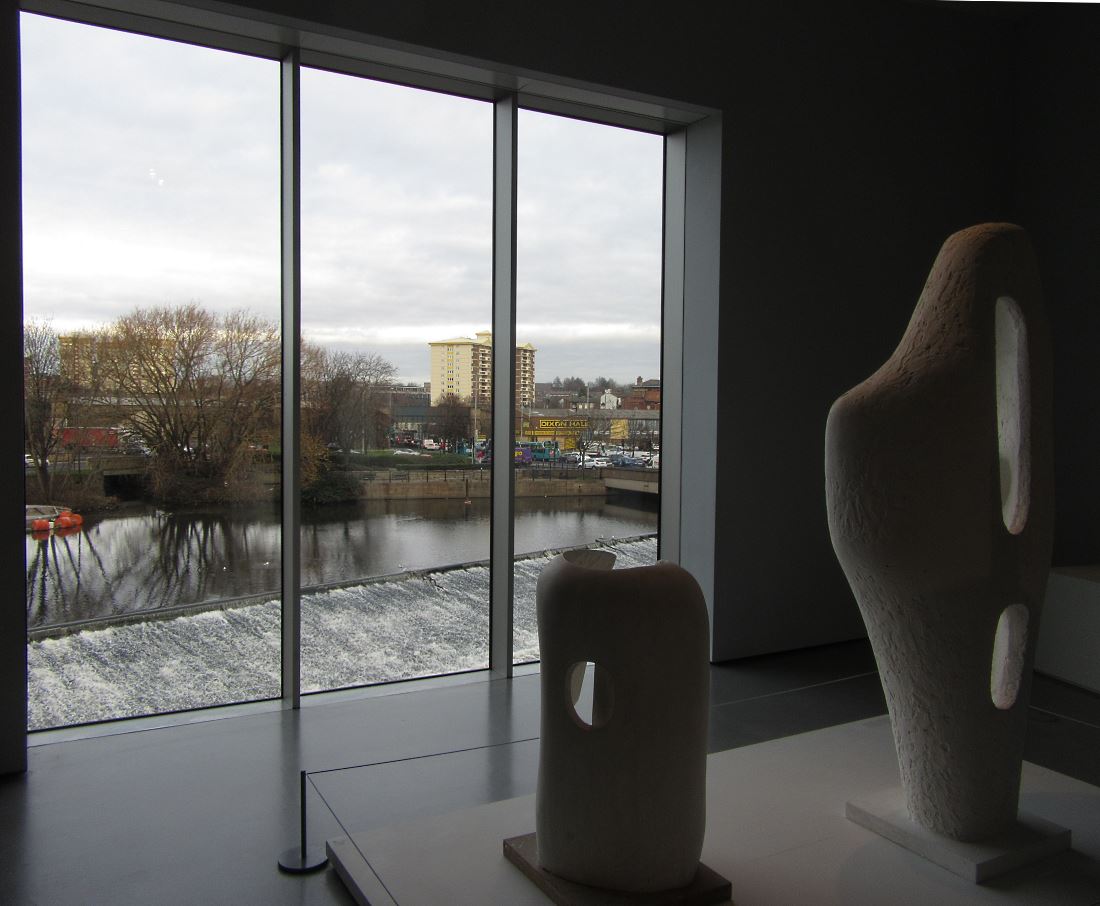 West Yorkshire can be gritty and monumental, so it’s appropriate that it provided two of the 20th century’s great sculptors: Barbara Hepworth, from Wakefield, and Henry Moore, from Castleford. Both are celebrated in The Hepworth, Wakefield’s fabulous art gallery, which sits right over the Calder – the view through the windows complements the artworks nicely (pic).

In addition to works by Moore and Hepworth (whose super 1960s screenprints were a bit of a revelation to me) the gallery was exhibiting its Sculpture Prize entries, one of which used water power from the Calder to drive air through a series of pipes to play music. Very nice, though it sounded like a panda trying to mate with a harmonium.

Pandemonium, in other words.1 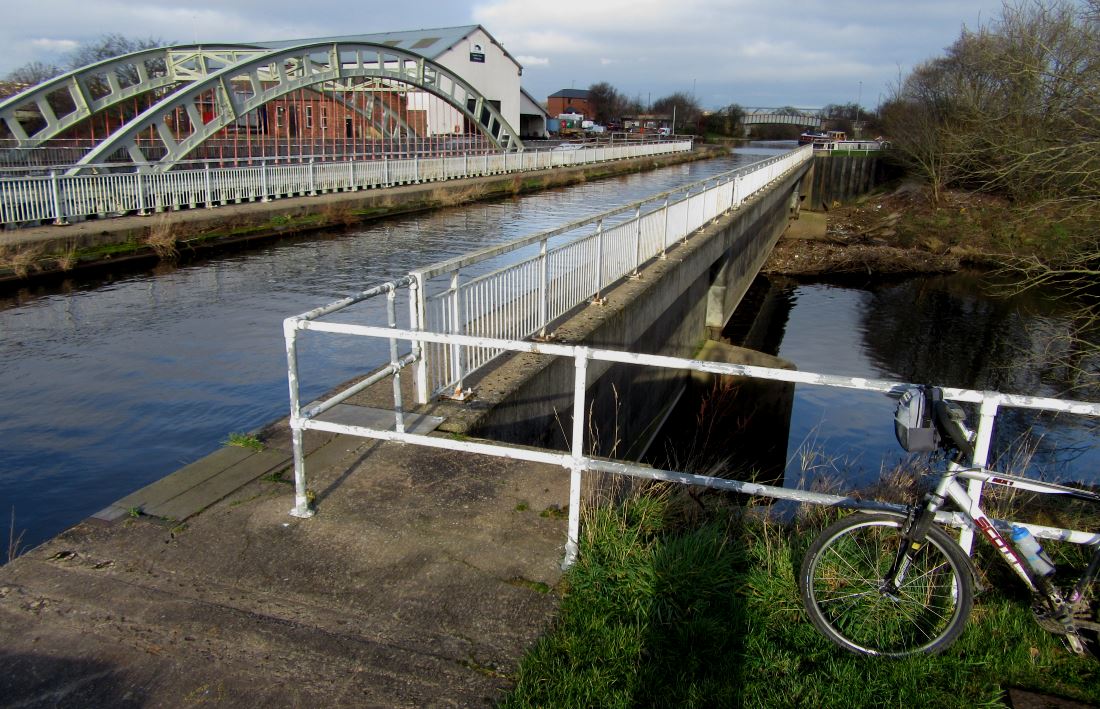 The path from Wakefield follows the canal at some times and the river at others, and sometimes both (pic): at Stanley the two cross via a historic early aqueduct and a modern replacement (pic). The old one is on the left: state-of-the-art in its time, it’s now hopelessly heavy, outdated and even unsafe, needing replacement by a new modern one. Funnily enough, the same applies to my bike. 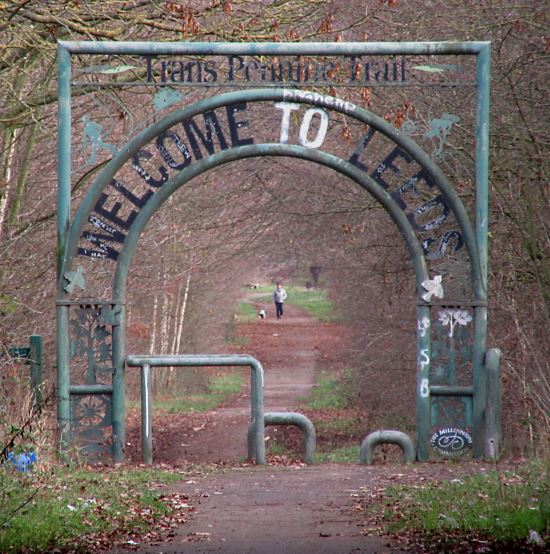 From here it’s railtrail alongside the final stretch of the Calder, going through this splendid gateway welcoming you to Leeds (pic)... 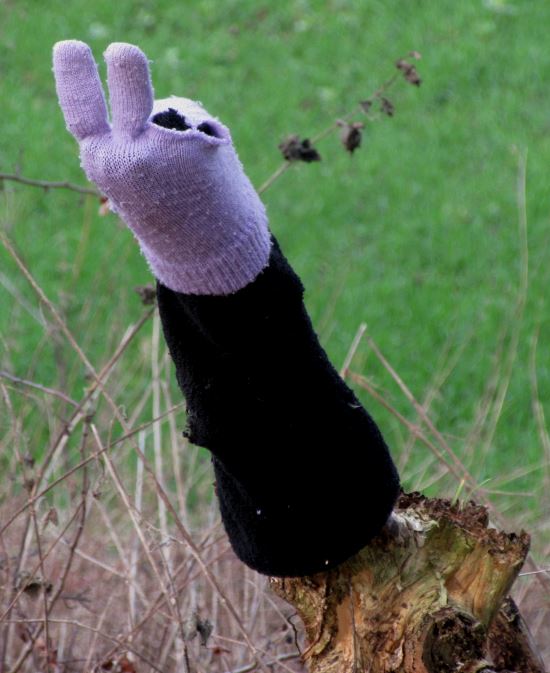 ...though a little further on, an anonymous artist has put up this alternative welcome message (pic).

Perhaps this is the 21st-century face of Yorkshire sculpture. 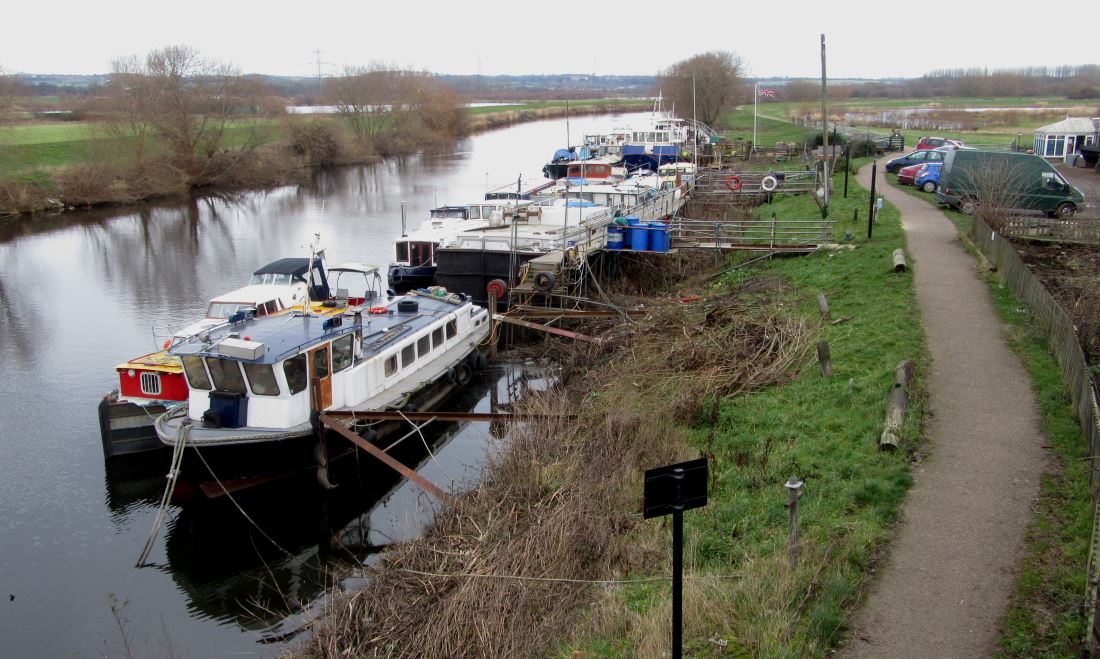 The last mile of the Calder has a newly surfaced bike path going along its southern side (pic), presumably paid for by the developers who are slinging up the housing estate just up from here. My journey was nearing its end. 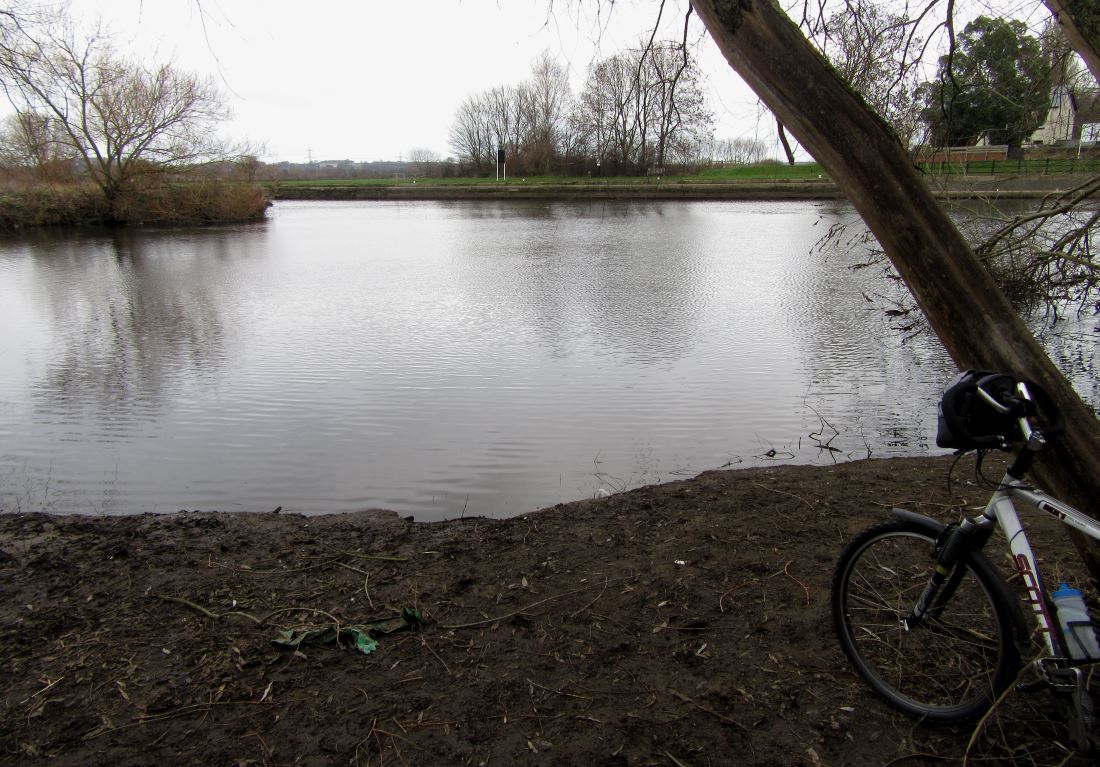 Finally, after the tarmac ran out, a muddy path took me to the mouth of the Calder (pic). Its junction with the Aire, on the edge of Castleford, is marked by a wooden bench - evidently a good place for a Yorkshire-style picnic, as demonstrated by the vast pile of empty beercans. (Most were Tyskie, but then Yorkshire is probably one of the most populous provinces of Poland. Na zdrowie! Do dna!)

I’ve really enjoyed this leisurely two-day trip. (It’s perfectly possible to do it in one, though you might need more daylight than a North of England January offers.) The Calder has an absorbing mix of Pennine scenery, ruggedly sophisticated mill towns reinventing themselves, powerful art, and down-to-earth, workaday West Yorkshire friendliness.

Plus, of course, cycleways all along it that are among the best in England. A hotchpotch of the barely adequate and the downright awful, in other words. Trying to find good infrastructure! Getting warmer? No, getting Calder!